“Poor in resolutions, but rich in positive signals”

At the COP 22 in Morocco little was decided, but interest in the MCC was strong: “Negative emissions” and “carbon pricing” were given particular attention among participants and the media. 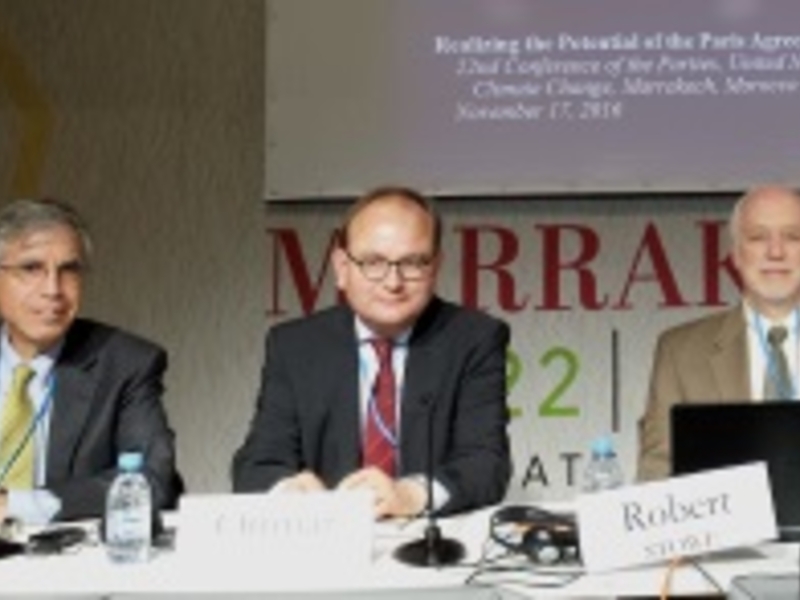 The aim of the COP 22, which has just ended, was to encourage the countries to agree on concrete policy measures for climate protection after the Paris Agreement. It was a rather detailed work program. “Poor in resolutions, but rich in many positive signals,” Ottmar Edenhofer, Director of the Mercator Research Institute on Global Commons and Climate Change (MCC), concluded in “Der Tagesspiegel”. The mood was “positive despite the Trump shock”. In an interview with the German press agency “dpa”, Edenhofer focused on China, a country that has “a great interest in being perceived as a softpower in the concert of international politics, and in receiving stronger recognition internationally.”
In the meantime, the German government presented a binding climate protection plan—as one of just a few countries. While this is appreciated by Edenhofer, it is also insufficient. It lacks a minimum price for CO2 as well as the willingness for a coal phase-out, criticizes Edenhofer, who is also the chief economist at the Potsdam Institute for Climate Impact Research (PIK), in an interview with “F.A.Z. Woche”. The economic newspaper “Valor Economico” from Brazil, the “Economic Times of India”, the Russian news agency “Interfax” and the “Christian Science Monitor” also asked Edenhofer for his assessment. At a COP panel hosted by the Havard Project on Climate Agreement, Edenhofer furthermore discussed specific measures for the implementation of the Paris Agreement.
The other side events with MCC participation were also very positively received. The MCC together with the environmental organization Germanwatch and the Federal Association of German Industry (BDI) organized an event on the subject of CO2 pricing. Concrete policy options were discussed—including a G20 roadmap.
At an event organized by the Global Carbon Project (GCP), Sabine Fuss, Head of the MCC working group on Sustainable Resource Management and Global Change, and other scientists presented the development of the global carbon budget. The presentations also involved an assessment of the potential of “Negative emissions” for meeting the 2°C or 1.5°C target. The radio station Bayerischer Rundfunk and the daily newspaper "taz" used statements by Fuss. The online portal Carbon Brief also posted a video interview (see above) with the MCC scientist.

Havard Project on Climate Agreement side event with Ottmar Edenhofer