German climate targets by 2030: how to reach them

The price signal in the EU Emissions Trading System only slows down half of Germany's carbon emissions. Not much is happening with the rest – and obligations under European regulation force the government to act. This policy brief shows the way out.

Under the current policy, Germany does not stand a chance to meet its obligations under the EU Effort Sharing Regulation: By 2030, carbon emissions in areas not covered by the EU emissions trading will have to be 38 percent below 2005 levels; as early as 2021, a limit applies that will be tightened year after year. Because of the foreseeable failure (see figure), a threat of billions of euros in fines and a serious damage to the credibility of EU climate policy are imminent. A socially balanced solution is needed: it mainly affects ​​the transport and heating sectors.

There are some efforts to limit carbon emissions even in the German transport and heating sectors, for example by implementing vehicle fleet standards at EU level or funding programmes for heating systems. However, no price tag is attached to climate gas, let alone announced future price increases. This gives little incentive to invest in low-emission technologies. Social balance is not taken into account.

It is necessary to also target areas not covered by the EU Emissions Trading System and make the paradigm shift from regulation to the market-based approach of carbon pricing. This can be designed in a socially balanced way.

Thinking on a European level. The medium to long-term goal is a uniform carbon price across all sectors in the EU. This lowers emissions where it is cheapest, and they must be cut at unprecedented speed. The best framework is the EU emissions trading. However, this requires time-consuming political coordination processes to create the proper framework and burden distribution and is the perspective for the period starting in 2030 at the latest.

Getting on board quickly. An initially national carbon pricing can be implemented through taxation or a separate emissions trading. Both instruments are basically equivalent if they are arranged appropriately. From an administrative perspective, a carbon tax is easier and faster to implement. Empirically founded assumptions about “elasticities” – how much a price increase actually slows down the demand for climate-damaging products – make it possible to estimate suitable carbon prices to achieve the pro­mised emission reductions from 2021 to 2030.

Determining pathways.  For a carbon tax, a pathway of 50 euros per tonne of CO2 in 2020, increasing gradually to 130 euros by 2030, is appropriate. In the transport sector, the current energy taxes continue to remain until a fundamental financial reform has taken place. They can be justified independently of climate policy, for example with air pollution or infrastructure costs. A corresponding pathway is also available for a national emissions trading: In order to avoid speculative price fluctuations misleading investors, the system needs a collar of minimum and maximum prices, 35 to 70 euros (2020) and later 70 to 180 euros (2030). Also, monitoring by an appropriate institution is needed so that the carbon pricing can be adjusted on the basis of evidence; this is specifically important when it comes to a tax.

Keeping an eye on the electricity sector. In parallel with the national launch, Germany should push ahead with the carbon pricing under the umbrella of the EU emissions trading. A minimum price should be quickly introduced here as well: the system still does not provide a reliable framework for long-term investment. Advances in transport and heating, such as e-mobility and heat pumps, also depend on rapid decarbonisation of the electricity sector, which is covered by the emissions trading.

Introducing a climate dividend. A carbon price of 130 euros per tonne in 2030 means 37 cents more per litre of fuel and 230 euros more annually for gas heating of an 80-square-metre flat.  But the state can redistribute the revenue as a per-capita refund (“climate dividend”) and reduce other taxes. Climate-friendly action is thus rewarded. On average (see figure) poorer households see relief, and there is hardly any difference between city and country.  For particularly affected groups, such as long-distance commuters, hardship clauses must be considered. 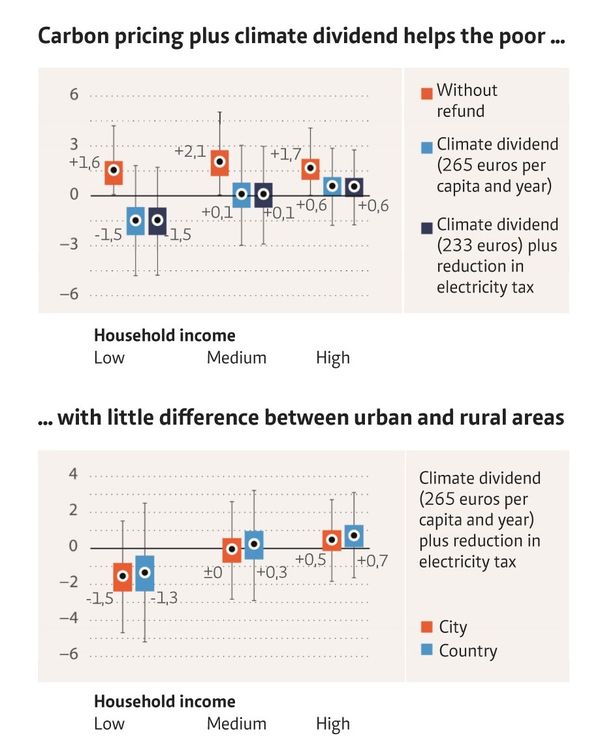 Relief (-)/burden (+) at a carbon price of 130 euros per tonne in 2030 in areas not covered by the EU emissions trade, as a percentage of consumer spending. The number is the average in income deciles No. 1, 5 and 10. The thick bars indicate the medium 50 percent in the respective household group. The thin bars indicate the rest except for statistical outliers (deviation above 1.5 IQA). Household incomes equivalence-weighted. Source: MCC

Carbon pricing should be the central instrument of climate policy. However, supplemental information tools can assist in overcoming consumer myopia. Spatially and temporally differentiated toll systems can also be useful to combat congestion, noise, and air pollution. Moreover, the historically uncontrolled growth of taxes and levies in the transport and heating sectors in Germany should be corrected.

It is also important to keep an eye on the competitiveness of the economy. As long as other countries do not pursue an ambitious climate policy, German policymakers must take a pragmatic approach. For example, companies in the transport and heating sectors could initially continue to receive energy tax exemptions within the carbon pricing reform. 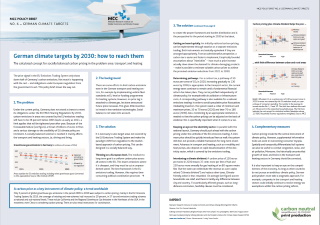 A carbon price as a key instrument of climate policy: a trend worldwide

Only 5 percent of global greenhouse gas emissions in the period 2005 to 2010 were subject to carbon pricing, mainly in the EU Emissions Trading System. By 2018, the coverage of existing and new schemes had increased to 20 percent, in 57 tax and emissions trading schemes at national and sub-national levels. These include California and the Regional Greenhouse Gas Initiative in the Northeast of the USA. In the meantime, even China is considering carbon pricing. There are also initial institutions for coordination.