A massive reduction of greenhouse gases can only take place in a properly functioning EU carbon market. A price floor for the traded carbon permits would reduce the current uncertainty of market participants, improve their price expectations, and thereby reestablish the credibility of the market.

> 2. The consequences: The EU climate policy is in danger of failing

> 4. The solution: A minimum price for the carbon allowances

The EU emissions trading system should play a key role for the climate goals and “decarbonization” (see "How carbon trading is supposed to work"). However, it is not fulfilling that role as the price of carbon permits is too low. Supply and demand are imbalanced, and politics is unfavorably affecting the market with announcements and interventions.

The result: No one is expecting the situation to change, and the allowance price continues to fall. This threatens to ruin the emissions trading, and therewith EU climate policy. Meanwhile coal is experiencing a renaissance. In many countries, new coal power plants are being built, with detrimental consequences for climate protection.

However, it is possible to save the emissions trading system—by a price floor for permits, as has already occurred in parts of the US and Canada. A price floor would:

1. The problem: The EU ETS is not working

To reach the EU climate goal, clear incentives to reduce emissions are needed, which also calls for greater investments as well as research and development. However, the price of allowances has been persistently low, at around five euros per ton of carbon, which does not yield the desired transformative effect. For this, it would have to rise to at least 20 euros until 2020 (see >more).

2. The consequences: The EU climate policy is in danger of failing

If the emissions trading system fails, climate protection in Europe will be dominated even more by national interests. The costs of avoiding CO2 emissions are then likely to rise, and Europe’s credibility as an international climate pioneer will continue to decline. At present, more than 100 new coal plants are already in planning in Europe and Turkey. Some 280 are in operation, many of them for over 30 years (>coalmap.eu).

For a higher carbon price it is crucial that the market can reliably expect the quantity of carbon allowances to decline. But the political majorities which would enable this are lacking. This became obvious during the so-called backloading process in 2012 when the EU unsuccessfully tried to raise the allowance price (>more). This effort was preceded by a two-year-long political struggle between countries with different dependencies on fossil fuels and hence different interests.

The market reacted with a further decline in prices, which reflects that traders do not expect policymakers to cut back on emissions allowances over the long term. This and market interventions such as the backloading bear uncertainties and lead to sudden price reactions to political events and announcements. As a matter of fact, these effects have considerable control over the carbon trade, which has become a betting shop for political decision-making (>more).

In response to this market failure, in 2014 the EU brought into play the so-called market stability reserve (>more). It involves withdrawing allowances from the market and refraining from reinserting them until the volume of available allowances has dropped below a certain threshold. The problem: the mechanism fails to reliably reduce the quantity of emission rights, whereby traders continue speculating on falling prices.

4. The solution: A minimum price for the carbon allowances

The EU emissions trading system needs a mechanism that reduces the uncertainty of market participants, improves their price expectations, and thereby reestablishes the credibility of the market. This can be achieved with a price floor, as has been done by the US Regional Greenhouse Gas Initiative in California as well as in Quebec, Canada (>more).

A minimum price can be established by introducing it into the allowance auctions. Auctions would then only take place if the floor price is offered. This would probably also become the benchmark for the allowance price in the open market. The effect: the overall market value of an allowance is not likely to fall below the minimum auction price.

As a complementary measure, the price ceiling can likewise be controlled, namely through the issuing of additional allowances once the auction reaches a defined maximum price. The effect: with more allowances available, the price will remain below the ceiling. This requires determining in advance exactly how many allowances are to go into the market at a particular time.

The price floor would have far-reaching effects even if it were not to come into effect until the trading period starting in 2021.

Simply the prospect of available emissions permits becoming more scarce and expensive will have an impact on the trade and the companies concerned. The latter must then decide: should we invest in allowances, which are becoming ever more expensive, or in effective carbon reduction? For the energy sector, the minimum price would provide a clear impetus for the exit from coal.

The floor price is an indicator of the range in which the certificate price can be expected to move. This alone will prevent uncertainty and the price falls that have happened in the past. In addition, the price signal wards off exploding costs and concerns over the decreased competitiveness of European companies.

The minimum price will make it worthwhile for individual EU countries to make additional national efforts in climate policy as their effects will no longer be cancelled out by other nations purchasing low-priced allowances to offset their own low efforts. This would allow all partners to act more in accordance with their individual preferences and costs with regard to climate mitigation. At the same time, a minimal coordination of national efforts will become possible.

Carbon savings are to occur primarily in companies and countries where the greatest successes can be achieved at the lowest cost in the long term (dynamic cost effectiveness). The floor price facilitates reaching this additional goal of the emissions trading system.

The EU member states will only agree on a minimum price if the poorer countries receive a financial compensation. For countries in Eastern Europe, for example, a higher minimum price implies greater efforts in terms of avoiding carbon emissions than in Western Europe. The same applies to the adjustment costs, due to fewer jobs in coal mining and in energy-intensive industries. In addition, the price of electricity will rise.

The financial equalization could be financed from the revenues generated from emissions trading. For example, in 2015, an allowance price of 20 euros would have generated approximately 2.9 billion euros in Germany and 12.5 billion in total trade (>more).

The donor countries will also benefit. Because the transfer payments necessitate the introduction of a minimum price, all EU countries can also have greater assurance of mutual cooperation in pursuing climate mitigation, thus ensuring that the efforts of each are not in vain.

In addition, a floor price would allow entering in international price negotiations with the G20 and the UN in order to address competition concerns at this level, too. 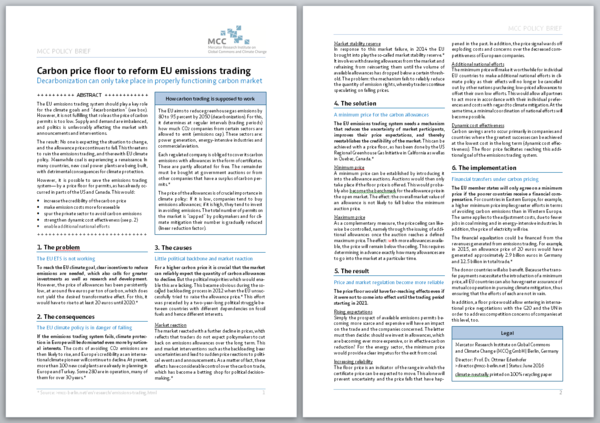 The EU aims to reduce greenhouse gas emissions by 80 to 95 percent by 2050 (decarbonization). For this, it determines at regular intervals (trading periods) how much CO2 companies from certain sectors are allowed to emit (emissions cap). These sectors are: power generation, energy-intensive industries and commercial aviation.

Each regulated company is obliged to cover its carbon emissions with allowances in the form of certificates. These are partly allocated for free. The remainder must be bought at government auctions or from other companies that have a surplus of carbon permits (>more).

The price of the allowances is of crucial importance in climate policy: If it is low, companies tend to buy emissions allowances; if it is high, they tend to invest in avoiding emissions. The total number of permits on the market is “capped” by policymakers and for climate mitigation their number is gradually reduced (linear reduction factor).