In Paris all countries worldwide committed to keep global warming below 2 degrees Celsius. This means that the remaining carbon budget is very limited—and that the world must reduce greenhouse gas emissions at rocket speed. But even then mankind may not meet the target without relying so-called negative emissions.

Negative emissions technologies remove CO2 from the atmosphere, thereby repaying the world’s carbon debt—with interest. One of the most important technologies is bio-energy with carbon capture and storage (BECCS). This process involves using carbon-neutral biomass as fuel, for example to fire power plants, and immediately capturing and storing the released CO2 in underground geological formations.

But: All negative emissions technologies face potentially significant trade-offs, for instance regarding land use. Therefore, they are no silver bullet for mitigation and should only be integrated with great care into a broader climate change strategy. Achieving emissions reductions in the short term and a transformation of energy systems should be the first choice.

The longer the world delays ambitous emissions reductions, the greater its carbon debt. Only negative emissions technologies can repay this debt by the year 2100.  Humankind is increasing its dependence on such technologies, even though their use is associated with great uncertainties.

The Paris Agreement, with its goal of limiting global warming to below 2 degrees Celsius compared to pre-industrial levels, is extremely ambitious. Indeed, it leaves humankind with only around 800 Gt in its global carbon budget (as of 2016).

The renaissance of coal has not been stopped, yet. Despite initial positive signals from China, the low price of coal has poor but rapidly growing developing countries investing in new coal-fired power plants. In this way, these countries are becoming significantly path-dependent, since opting for coal now invariably means decades of rising CO2 emissions. A continuing coal renaissance further accelerates the rapid shrinking of the carbon budget. If new coal-fired power plants are built, this will shut the door to reaching the 2-degree-target.

The 1.5-degree-target increases the requirements for emissions reductions, given that it decreases the carbon budget to approximately 200 Gt. Were emissions to remain the same, the world would be left with at best five years. As a result, negative emissions must be much higher with the 1.5-degree-target than with the 2-degree-target. How this could be achieved remains an open question: The technologies under discussion are being developed at a pace that lags behind the road maps of the International Energy Agency (IEA) and are highly controversial among the public.

The longer the world delays action on significant emissions reductions, the greater its need for negative emissions. The importance of the latter as a means to pay off carbon debt is growing—even though they are associated with considerable uncertainties.

More than two thirds of the IPCC‘s scenarios for reaching the 2-degree-target require that the BECCS‘ share in primary energy exceeds 20 percent by the year 2100. This means that more pilot projects are needed now. The large-scale industrial use of negative emissions technologies calls for due consideration of their cost, impact on land use and acceptance by the public. The world’s remaining carbon budget is nearly depleted for the 2-degree-target and, especially, the 1.5-degree-target. Therefore, the world must decarbonize as quickly as possible, in particular by way of a coal phase out. 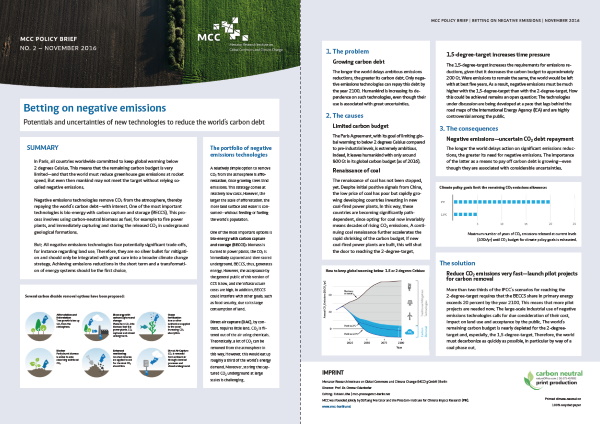 A relatively simple option to remove CO2 from the atmosphere is afforestation, since growing trees bind emissions. This strategy comes at relatively low costs. However, the larger the scale of afforestation, the more land surface and water is consumed—without feeding or fueling the world’s population.

One of the most important options is bio-energy with carbon capture and storage (BECCS): biomass is burned in power plants, the CO2 is immediatly captured and then stored underground. BECCS, thus, generates energy. However, the acceptance by the general public of this version of CCS is low, and the infrastructure costs are high. In addition, BECCS could interfere with other goals, such as food security, due to its large consumption of land.

Direct air capture (DAC), by contrast, requires little land. CO2 is filtered out of the air using chemicals. Theoretically, a lot of CO2 can be removed from the atmosphere in this way. However, this would eat up roughly a third of the world’s energy demand. Moreover, storing the captured CO2 underground at large scales is challenging.