Spectacular installation by Fridays for Future at the historic Gasometer in Schöneberg. MCC Director Ottmar Edenhofer: the carbon price is the appropriate scarcity signal. 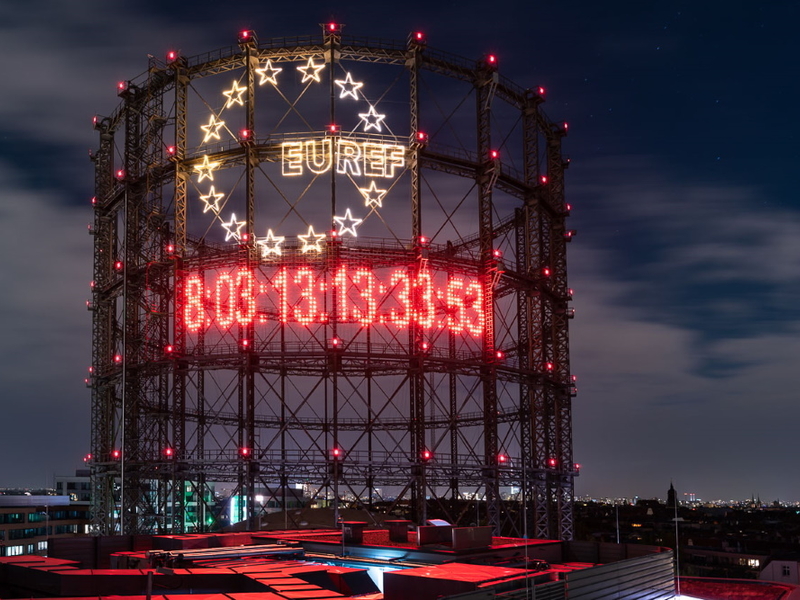 Two days before the third "Global Climate Strike", the social movement Fridays for Future drew attention to the urgency of action with a spectacular installation: At the historic Gasometer in Berlin-Schöneberg, activists switched on a 40-metre-wide and 10-metre-high "carbon clock" at a press conference.

The clock corresponds to an HTML code (more information here) publicly provided by the Berlin climate research institute MCC (Mercator Research Institute on Global Commons and Climate Change). It runs backwards and symbolizes the remaining carbon budget for a specific temperature target. It is based on the decision of the Paris World Climate Summit in 2015 to limit global warming to well below 2 degrees Celsius and, if possible, 1.5 degrees Celsius above pre-industrial levels, and on the latest IPCC report on this subject. According to the report and calculated from today, only 1100 gigatonnes may be emitted for the 2-degree target and only 340 gigatonnes for the 1.5-degree target – equivalent to a good 26 and 8 years respectively at the current rate of emissions.

The warming will not occur when the clock runs out: there are inertias in the system, and the IPCC report also refers to uncertainties such as the melting of permafrost soils. The MCC provides the data for both temperature targets on its website and, as a scientific institute, has decided to focus on the 26 year variant. Fridays for Future now chose the 8-year variant.

MCC Director Ottmar Edenhofer, who appeared as a guest at the event, explained that the economically right way to reflect the scarcity of emissions that are still available is by charging a carbon price. This should become the core instrument of climate policy – in a comprehensive report for the Federal Government, MCC has mapped out courses of action by showing and clarifying the available options. Of course, social actors such as Fridays for Future would be free to set other accents and also to demand other measures, Edenhofer suggested. He would see this as part of the necessary discourse, even if he would not adopt the demands as his own. It would now be the turn of the Climate Cabinet.