Halting the anthropogenic warming of the planet is a global task. The European Union has high ambitions for its climate policy – yet how can it handle that others are doing less? This policy brief highlights the options.

The EU, accounting for a tenth of all greenhouse gases, aims to become climate neutral by 2050. To achieve a phase-out of fossil fuel usage, it announced funding programmes and an increasing pricing of the most important greenhouse gas carbon dioxide (CO2), which might even be extended to all sectors. However, if Europe emits less CO2, this will not reduce global emissions at the same scale: lax climate policies outside the EU lead to a partial shift of carbon emissions to other regions of the world, resulting in "carbon leakage".

So far, there is little empirical evidence of carbon leakage – but climate policy has not been very ambitious yet, and many industrial companies have received free emission certificates. With rising carbon prices, the problem will surface. Studies based on general equilibrium models suggest that, without countervailing policy measures, 5 to 19 percent of the emissions avoided in the EU will reappear elsewhere.

The incentive for carbon leakage is removed by levelling the playing field, creating similar conditions inside and outside the EU. Five different pathways lead in this direction.

Globally coordinated climate policy. In order to reduce emissions, carbon-related production would ideally be made more expensive worldwide. Carefully adjusted policies would make sure that unit costs rise by precisely the same amount everywhere. A carbon price can be the core instrument. The price would initially be determined in each country according to its "Nationally Determined Contribution“ announced at the word climate conferences and readjusted according to stages of development: if production in country A is twice as much carbon-intensive as in country B, the carbon price only needs to be half as high.

Free allocation of emission allowances. Since a globally coordinated climate policy is not in sight, the EU has so far settled on issuing certificates free of charge within its emissions trading system. Many industrial companies are favoured, depending on the carbon-intensity of their production and their exposure to international competition. If carbon pricing presents no burden on their calculations, there is no incentive for carbon leakage. However, since emissions must decrease, the number of certificates in emissions trading will be reduced over time: compensation of companies is increasingly incomplete, building pressure.

Textbook border carbon adjustment. The idea to secure a level playing field can also be reversed: rather than suspending carbon pricing for domestic manufacturers, the EU applies it to imports as well. A carbon tax could be matched by import duties, and emissions trading may provide that non-EU manufacturers must also buy certificates. Exports would in turn be reimbursed for carbon pricing. However, it is very difficult to precisely determine this border adjustment. It requires knowledge of the carbon footprint for each product, across all stages of the value chain. Also, substitution effects outside the EU must be taken into account for an optimal border regime (see figure "Two substitution effects of border carbon adjustment").

Sanctions as a strategic threat. The EU can also make imports more expensive to not only reflect its own carbon pricing, but push for policy change among its trading partners. In response to the uncooperative attitude of free-riders on the climate issue, the EU could deliberately deviate from the rules of international trade. The result would be so-called carbon clubs, which set themselves apart from the outside world and whose members cooperate, through free trade or technology transfers.

Pragmatic border adjustment. Ultimately, one comes up against limits with doctrine as much as with confrontation. Thus the EU may also try to limit carbon leakage to some extent with a modest approach: border adjustment only for some energy- and trade-intensive sectors. Free emission allowances would again be cancelled in return. Border adjustment is set pragmatically, also with a view to the above-mentioned substitution effects outside the EU.

If the EU should indeed secure its carbon pricing with a pragmatic border adjustment in order to counteract the mere relocation of emissions, an important choice must be made – how to make use of revenues. Economic analyses show that when industrialised countries retain them for themselves, this shifts the burden of the climate policy package towards developing countries, rather than other industrialised countries.

Revenues from the border carbon adjustment should therefore be earmarked for technology transfer and international climate financing (Green Climate Fund). Other solutions could also be negotiated: trading partners might carry out border adjustment themselves, using tax revenues from exports to the EU to invest in climate protection. 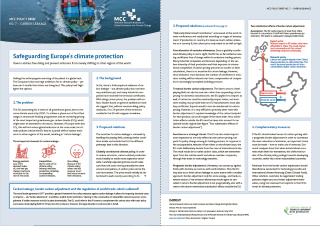 The world trade agreement GATT provides a general framework for policy measures against carbon leakage. It allows for imposing domestic taxes on imports – via "border adjustment". In addition, explicit trade restrictions "relating to the conservation of exhaustible natural resources" are legitimate, if similar measures are also in place domestically. The EU could refer to this if it were to complement the carbon price with trade policy and create a level playing field for EU and non-EU producers. However, the legal situation is controversial in detail.