While road traffic has undeniable benefits, it is also the target of massive criticism. Ensuring sustainable mobility, and reducing the negative externalities in an efficient and socially acceptable way, requires intelligent regulation. The new MCC policy brief "Road traffic" offers an overview of existing policy instruments and the current state of research regarding their impacts.

In no other sector has the effort to reduce greenhouse gas emissions been as unsuccessful as in the transport sector. In Germany, for example, emissions from this sector rose by 2 percent between 1990 and 2017, even though total emissions fell by 28 percent. By far the most important area within this sector is road traffic. Climate change – a so-called externality, as economists put it – is not adequately taken into account by individuals when deciding whether or how to drive, alongside other negative externalities, especially those of traffic congestion, local air pollution and accidents.

2. The pressure to act

Under the Paris Agreement signed in 2015, many countries are now under pressure to drastically reduce emissions in the transport sector as well. Indeed, e-mobility and digitalization are making it less expensive and more convenient to operate a vehicle, which is essentially an incentive to drive even more. At the same time, there is a growing awareness of other negative externalities, especially air pollution.

Maintaining mobility all the while minimizing externalities can only be achieved by bundling a set of policy measures. The focus is on five instruments, the effects of which have been extensively analysed by scientific research.

Fuel taxes. A 10 percent increase in gasoline prices reduces car traffic in Europe by 3 to 4.5 percent and in the United States (with less public transport) by 1 to 3 percent. This reduces carbon emissions, congestion, air pollution and accidents. A socially responsible expansion of fuel taxes is hence of great importance for reaching climate and environmental targets. Yet the potential of this instrument remains untapped; since the year 2000, gasoline prices in the then 15 EU countries have not risen in real terms. Fuel taxes also increase the incentive to buy more fuel-efficient cars, even if consumers systematically underestimate future savings.

Vehicle taxes. The strategy of reducing the negative externalities of road traffic through a modern vehicle fleet is also pursued by most EU countries with vehicle taxes that depend on the car’s carbon emissions. The overall incentive effect of this strategy has been shown to be moderate, and the effect is greater for registration taxes than for an annual tax on holding the vehicle. Bonus-malus rules can become counterproductive, when they are poorly balanced and not only redirect car demand towards efficient vehicles but also boost the overall demand, as was the case in France.

Road pricing.  A wealth of research literature also sheds light on the effects of the increasing use of road tolls. Ideally, these should be differentiated according to time and place. In London, Stockholm and Milan, they led to a 30- to 50-percent decrease  in traffic congestion and 9- to 19-percent decrease in air pollution and are, although initially controversial, widely accepted. Moreover, in a context of decreasing fiscal revenues from gasoline tax (with cars are becoming less and less gasoline-dependent), the expansion of toll systems could close the gap, and hence become more relevant as a financial policy measure.

Driving bans.  Access restrictions for high-emission vehicles in “low emission zones” can reduce pollution, for example through the reduction of particulate matter. Empirical data for Germany have shown a reduction of 4 to 9 percent. Also, driving bans are a way to mitigate the Gruenspecht effect (see above, “standards”), and are hence an effective instrument for modernizing the vehicle fleet. 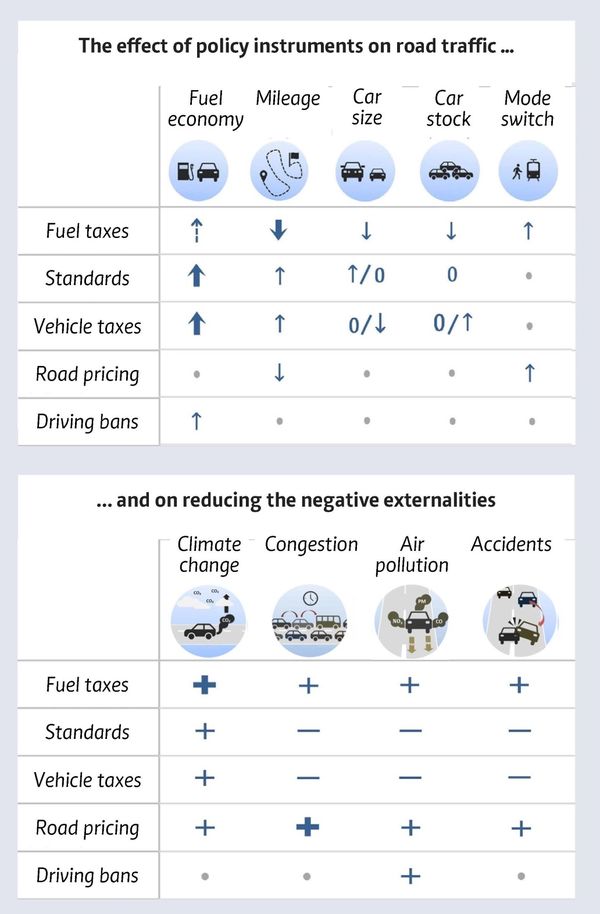 An important complement to making road transport more sustainable is the expansion of public transport systems. First, there is scientific evidence that this significantly supports the public support for green transportation policies. Second, the so-called price elasticity of the demand for private transport is turned to be significantly higher: fuel taxes and road tolls generally bring about stronger changes in behaviour in the presence of broader public transit. Third, there is evidence that network expansions contribute directly to improving traffic congestion, air quality and road accidents.

Moreover, low-income households are more likely than others to use busses, subways or railways. This is why public transport subsidies contribute to an equitable and socially balanced policy mix. 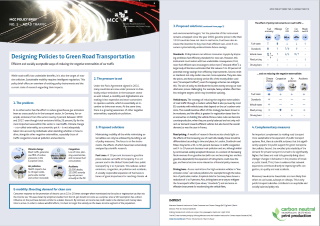 Consumer response to the promotion of electric cars is 15 to 20 times stronger when incentivized via the sales or registration tax than via the income tax. This was shown by empirical studies from the US, yet should not come as a surprise, since a VAT exemption has a direct influence on the purchase decision, similar to a dealer discount. By contrast, an income tax credit needs to be claimed, and money takes time to arrive. In order to reduce windfall effects, it is best to target the subsidy on the lower-income segment of the population.