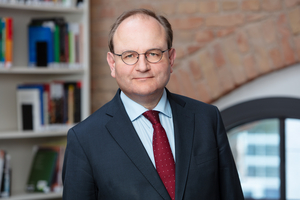 Prof. Dr. Ottmar Edenhofer is Director of the Mercator Research Institute on Global Commons and Climate Change (MCC), founded jointly by Stiftung Mercator and the Potsdam Institute for Climate Impact Research (PIK), where he also serves as Director and as Chief Economist. He is also professor of the Economics of Climate Change at the Technische Universität Berlin. From 2008 to 2015 he served as Co-Chair of Working Group III of the Intergovernmental Panel on Climate Change (IPCC), which won the Nobel Peace Prize in 2007. Ottmar Edenhofer supports the Science-Industry Cooperation, the Workgroup Climate, Energy and Environment within the German National Academy of Sciences Leopoldina as an active member, and furthermore advises the World Bank within the advisory committee of the Green Growth Knowledge Platform. Since 2013 he is also co-chairing the new Energy Platform by the European Council of Academies of Applied Sciences, Technologies and Engineering (Euro-CASE). In January 2015, Ottmar Edenhofer was elected a member of the German National Academy of Science and Engineering acatech due to his outstanding scientific achievements.

His research work is concentrating on strategies to mitigate climate change, questions of growth- and development theory, public finance, questions of distributional effects of climate policy instruments, game theoretic aspects of designing international agreements and last but not least energy economic aspects. He specializes in the Economics of Atmospheric Stabilization, Social Cost-Benefit Analysis, Sustainability Theory, Economic Growth Theory, Environmental Economics, Welfare Theory and General Intertemporal Equilibrium Theory. Under his leadership, Working Group III carried out the Special Report on Renewable Energy Sources and Climate Change Mitigation which was published in 2011. It was discussed widely in the public arena (Nature, NY Times, Report by Secretary-General Ban Ki-Moon in the UN General Assembly, BMU, BMBF, etc) and also launched a scientific debate on the future role of renewables. Being one of three co-chairs of WG III, Ottmar Edenhofer led the assessment cycle of the IPCC Working Group III from 2008 to 2015 "Mitigation of climate change" which produced the Fifth Assessment Report "Climate Change 2014: Mitigation of Climate Change" in April 2014. Ottmar Edenhofer authored a considerable number of articles published by Science, PNAS, Nature Climate Change and in various high-ranking environment, energy and resource economic publications and various books. He leads and coordinates several externally funded research projects and was a Lead Author for the Fourth Assessment Report of the IPCC from 2004 until 2008. Currently he supervises several PhD students and Master students.

In addition to his teaching and research, he is actively involved in public policy and in the public debate in Germany and at EU level. Until 2009 he was key climate change advisor to federal foreign minister and deputy-chancellor Frank-Walter Steinmeier. He was a member of the Advisory Board of the German Information Centre for Carbon Dioxide Technologies, IZ Klima.