Carbon prices create incentives to invest in climate-friendly technologies and thus promote the transition to a low-carbon economy. However, considering only the direct effects low-income earners are burdened disproportionately high. The revenues from carbon pricing should therefore be used to take the burden off these households in return—this could lead to lower inequality and greater social justice.

Climate policy can exacerbate social inequality, in which case researchers speak of negative distributional effects. Considering only the direct effects, this also applies to carbon pricing. In industrial countries, this policy instrument can be “regressive”: It places a higher burden on low-income earners than on affluent households, as the former spend a higher share of their income on carbon-intensive goods such as electricity and food. In developing countries, the effects of climate policy can be quite different; which is why the main focus of this policy brief is on industrial countries.

To counter the negative distributional effects, climate policy must be embedded in a broader policy approach, which might even allow for greater social justice. Possible solutions would be the investment of carbon pricing revenues in climate-friendly transport infrastructures, an annual bonus for each citizen, or an eco-social financial reform.

Environmental taxes pose a financial burden on consumers and are often seen skeptically by the population. The poorer segment of the population in most developed countries spends a higher portion of its income on carbon-intensive goods, although the wealthy have a larger carbon footprint in absolute terms. This can exacerbate social inequality and might reduce the social acceptance of carbon pricing.

Poorer households are less likely to support climate policy for a number of reasons. In case carbon-intensive products are taxed more heavily, this is reflected in higher consumer prices. As a result, low-income earners are burdened more by environmental taxes, if the revenues are not used to alleviate these distributional effects. In addition, there is an urban-rural divide: Those who live in urban centers with well developed public transport services are less dependent on carbon-intensive private transport, and therefore less affected by rising gasoline prices. Moreover, in regions with good transport infrastructure, climate policy leads to a rise in land prices, which benefits property owners to a disproportionate degree. 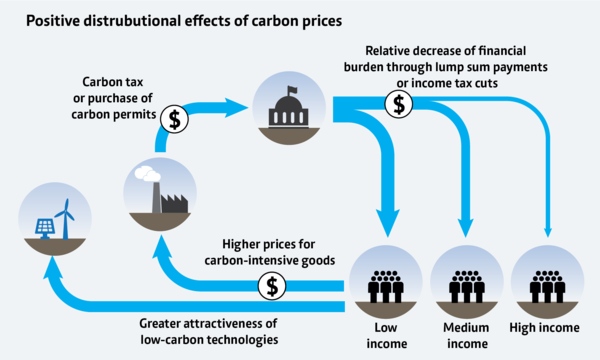 To ensure that carbon prices have positive distributional effects and are socially fair, there are three alternative measures:

The public revenues from climate policy are used to invest in climate-friendly transport infrastructures. In the long term, this will allow poorly connected regions to develop and to offer their households cost-effective alternatives to private transport. The disadvantage of this measure: Since infrastructure cannot be built to the same extent across the whole country, only parts of the population benefit.

A yearly bonus for each citizen

Every citizen, even those with no income, is given an annual bonus. For this, the revenues from carbon pricing are distributed as lump sum payments of equal amounts to every citizen, for example as checks around Christmas time. Households with a small carbon footprint stand to gain, since the bonus amounts to more than the carbon tax they have contributed throughout the year. Conversely, those who consume a lot of carbon stand to lose. This measure is easy to communicate and implement. Nonetheless, it forgoes the opportunity to reduce other distorting taxes.

A sustainable financial reform is particularly beneficial for low-income earners, in the form of higher net wages and more jobs. This is achieved when the revenues from carbon prices (e.g., from the sale of emission rights) are used to reduce taxes. If the income tax—which usually has undesirable distorting effects—is lowered, labor becomes more affordable for companies, who then can hire more people. This measure has three positive effects: it benefits the climate, leads to more social justice, and creates jobs. 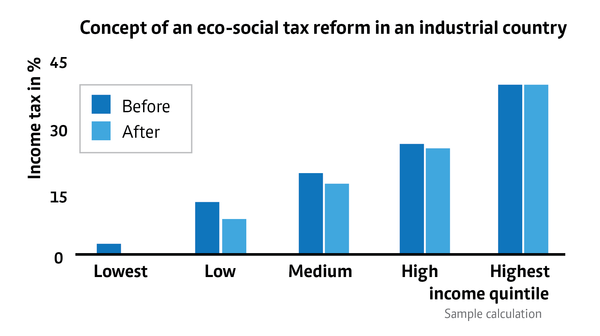 Investments in sustainable transport infrastructure are vital to reduce carbon emissions. Moreover, they increase transportation mobility and promote economic development in remote regions. If citizens were given the opportunity to participate more directly in climate policy through an annual bonus, carbon pricing would not be as abstract an instrument. A lump sum payment would be clearly visible to the citizens. The same applies to a tax reform, but to a lesser extent, since it is a single event. However, a sustainable financial reform has more advantages: It would not lead to any additional burdens and would instead induce a shift of taxation away from labor and towards carbon. If the income tax was lowered in a progressive way, inequality would be reduced—with a positive impact on economic growth. In addition, the finance ministers would gain a greater scope of action, whereby climate politics would become a propitious instrument in the domestic economy as well. 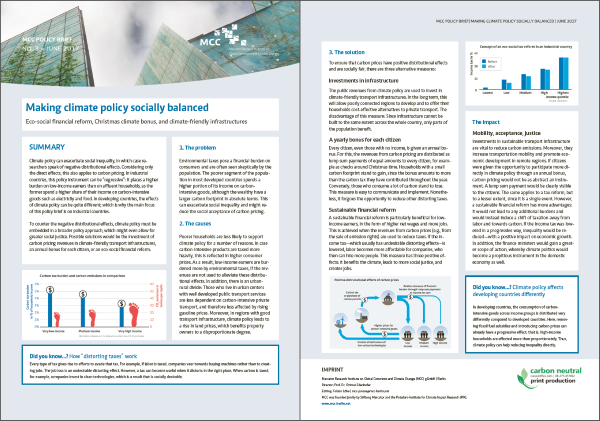 Every type of tax gives rise to efforts to evade that tax. For example, if labor is taxed, companies veer towards buying machines rather than to creating jobs. The job loss is an undesirable distorting effect. However, a tax can become useful when it distorts in the right place. When carbon is taxed, for example, companies invest in clean technologies, which is a result that is socially desirable.