Closing the deal on the end of coal

Coal is in many countries still seen as one of cheapest energy sources. This is due to the fact that the negative effects of burning coal on the climate and human health are not reflected in energy prices. In addition, developing countries in particular have the problem that financing costs of renewables remain high. The new MCC Policy Brief "Coal Phase-out" shows what measures are necessary to phase out coal rapidly and in a socially acceptable way.

Many countries around the globe still rely heavily on emissions-intensive coal. While a coal phase-out is currently being discussed in most industrialized countries, developing and newly industrializing economies invest in new coal to cover their growing energy needs. Disregarding the negative effects on the environment and human health, coal remains the cheapest energy source in these countries, as financing costs of renewable energy remain stubbornly high.

In order to incentivize more investments in renewables in both industrial and developing countries, fossil-fuel subsidies need to be abolished and sufficiently high carbon prices need to be introduced on an international level. In addition, capital costs for renewables in developing and emerging countries must be reduced. These measures could be combined with ‘recycling’ carbon pricing revenues to compensate possible adverse effects of climate policy on poorer households. 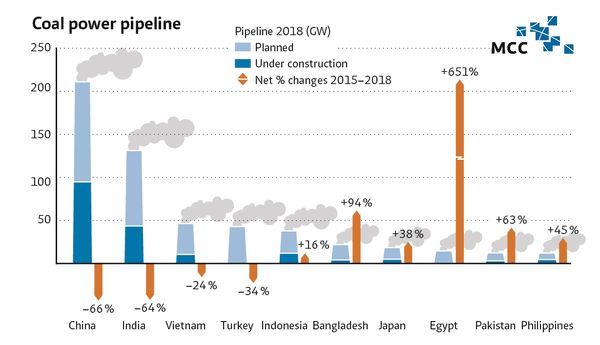 To achieve the Paris Agreement’s temperature goal of limiting global warming to well below 2°C, cumulative CO2 emissions since 2011 must not exceed 1000 gigatonnes. However, many countries still invest heavily into highly emitting coal-fired power plants. Once built, coal plants usually have a very long lifetime of 40 years or more. Emissions are thus locked in for several decades. If all coal plants that are currently under construction and planned were built—and run until the end of their lifetime—they would eat up nearly half of the remaining carbon budget consistent with the Paris goals. A global energy transition away from coal until the middle of the century is needed.

Economic growth since the industrial revolution has lifted hundreds of millions of people out of poverty. This growth has gone hand in hand with steep increases in energy demand by households and industry. As this demand has often been covered by coal, emissions have also increased. Although investments in new coal plants in China and India have recently slowed down, this reduction will in part be cancelled out. This is due to the planned expansion of coal use in fast-growing emerging economies, such as Turkey, Indonesia and Vietnam.

There are several reasons for these ongoing coal investments.

First, coal is cheap, widely available and a well-known and proven technology. Institutional and human capacities can handle coal as a source of electricity even in poor countries.

Second, renewables—despite recent cost reductions—are more capital intensive than coal as most of the lifetime costs need to be financed upfront. In developing countries, where capital costs are high due to credit constraints and investment risks, this works to the disadvantage of renewables.

Third, the political economy of the countries’ energy systems often favors coal compared to low-carbon alternatives. In some countries, the coal sector (mining and power plants) is an important employer, contributes significantly to the state budget, or is seen as a source of cheap and reliable energy. 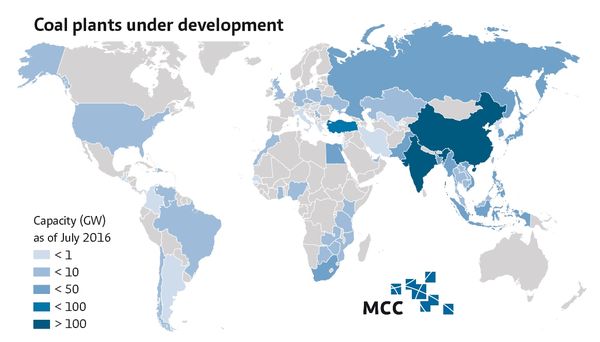 Coal can only be successfully phased out if low-carbon alternatives become more attractive.

First, market prices need to reflect the external costs of coal use, such as those in public health and the environment. This could be achieved by removing direct and indirect subsidies and introducing carbon pricing (e.g. an emissions tax or tradable emission permits). In this way, renewables would have a fair chance on a level playing field.

Second, to overcome the barrier of high financing costs in developing and emerging countries, low-carbon investments need to be de-risked. This can be achieved by reducing policy uncertainty and shifting financial market risks to actors that have a higher willingness to bear them, such as development banks.

Third, compensation schemes that avoid losses for people on low incomes and industries that could be affected—which might otherwise block climate policy measures—are needed. This requires a thorough understanding of the distributional impacts of climate policy. 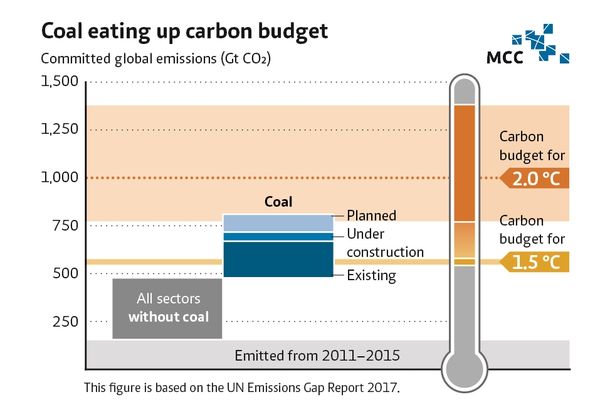 Further lock-ins into carbon-intensive infrastructures need to be avoided. This is a matter of timing and requires support by the international community in various ways.

Second, international finance for coal needs to be phased out. In addition, the international community can help reduce investment risks for renewables, for instance by providing loan guarantees and policy risk insurance.

Finally, the international community should assist in designing schemes that ensure a ‘just energy transition’. Climate finance could be used to expand social safety nets shielding the poor from the impact of higher energy prices. 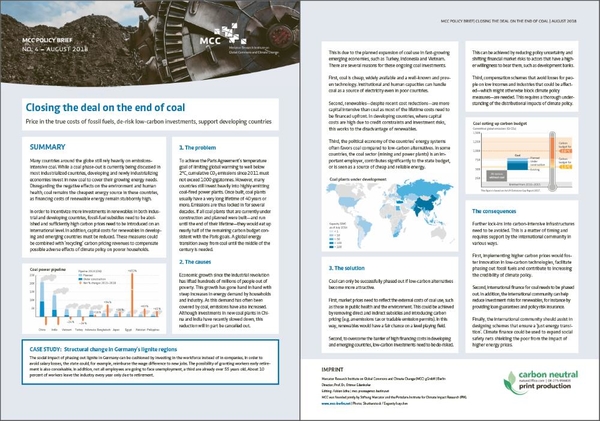 The social impact of phasing out lignite in Germany can be cushioned by investing in the workforce instead of in companies. In order to avoid salary losses, the state could, for example, reimburse the wage difference to new jobs. The possibility of granting workers early retirement is also conceivable. In addition, not all employees are going to face unemployment, a third are already over 55 years old. About 10 percent of workers leave the industry every year only due to retirement.