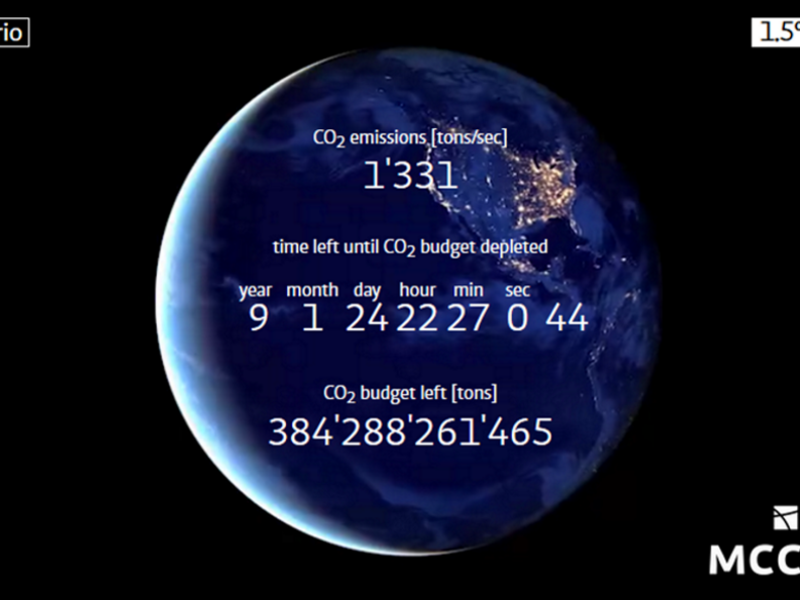 The Mercator Research Institute on Global Commons and Climate Change (MCC) has updated its Carbon Clock in response to the latest IPCC Special Report, which warns that global warming must be limited to a 1.5⁰C increase in order to avoid dangerous climate change. Based on the report, this can only be achieved by limiting the total amount of CO2 to be released into the atmosphere to a maximum of 420 gigatons (Gt). However, since the world emits around 42 Gt of CO2 every year—the equivalent to 1332 tonnes per second—that budget is expected to be used up in about nine years. The budget for staying below the 2⁰C threshold, for its part, of approximately 1070 Gt, will be exhausted in about 26 years.

The MCC Carbon Clock thus represents the new generally recognized state of scientific research. Shortly before the publication of the IPCC Special Report, the Clock, which features a real time countdown of the remaining available budget, had actually been exhausted. The updated version of the Clock now includes, among other things, new estimates of the warming that has already taken place and is based on a broader database that now also includes observations. In the Paris Agreement, all countries worldwide had decided to limit global warming to well below 2⁰C (preferably 1.5°C) above pre-industrial levels.

“Given the extremely limited carbon budget, the world will have just a few more years left for effective global climate protection,” says MCC Director Ottmar Edenhofer. “In terms of climate policy, we look back at a lost decade during which global emissions even rose, despite all commitments made in the Paris Agreement. The IPCC shows that the possibilities at our disposal for staying below the 1.5⁰C threshold are more numerous than previously assumed. However, political leaders continually refuse to recognize or make use of this room for maneuver.”

The concept of ​​the carbon budget is based on a nearly linear relationship between the cumulative emissions and the temperature rise. Nevertheless, this does not mean that the earth would necessarily be 1.5⁰C warmer at the very point in time when the remaining carbon budget for staying below the 1.5⁰C threshold was used up. This is due to, among others, the fact that there is a time lag between the concentration of emissions in the atmosphere and the impact thereof on the temperature.

The update of MCC’s Carbon Clock based on the IPCC Special Report also involved a technical change: So far, the IPCC had illustrated the likelihood of a given outcome in terms of a lower (33 percent), a medium (50 percent) and a high (66 percent) probability. In light of the new findings, however, the scientists now say that the calculated budget of 420 Gt for reaching the 1.5⁰C threshold will be used up with 66 percent of the examined scenarios. This indicates a shift in uncertainties: away from the likelihood of staying below the temperature threshold, and towards the likelihood that the models will indeed translate into a 1.5°C rise in temperature. In addition, uncertainty factors persist that result, among other things, from different definitions of the 1.5°C target as well as different assumptions concerning the climate sensitivity, the actually attained degree of global warming and the future development of other greenhouse gases.

“Any carbon clock, including ours, will by nature be subject to uncertainties. Yet what our clock does show without any doubt is the urgent need for political action: By 2050, the global economy must be completely carbon-free, “says Brigitte Knopf, General Secretary of MCC. “Thanks to the IPCC we now have a more detailed understanding of the need to drastically reduce carbon emissions.”