Study assesses German climate policy in the context of the 1.5 degree target

Saying that the country is on track implies tacit assumptions. Here these are made transparent – by comparing the emissions still expected with the remaining global carbon budget. 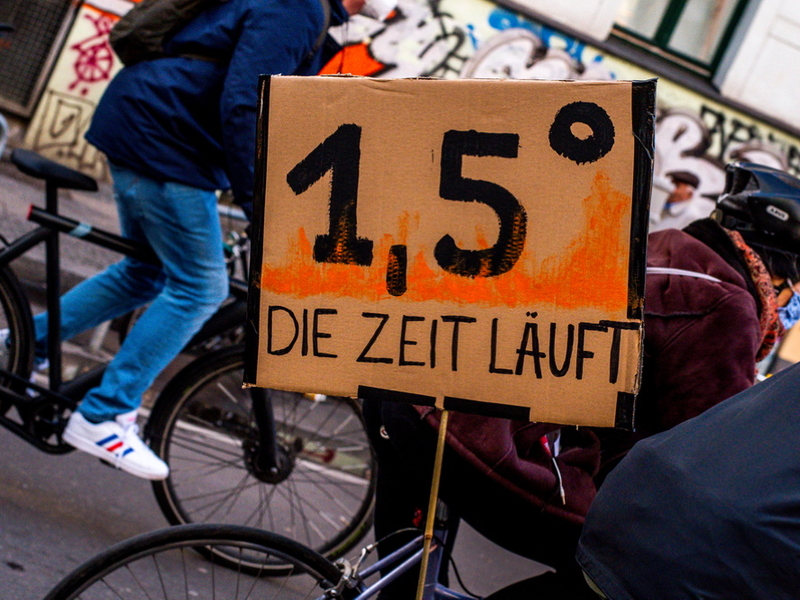 The clock is ticking: poster at a climate demo in Berlin last year. | Photo: Shutterstock/Timeckert

Even though the Ukraine war is currently shocking the world, progress towards climate protection must not be interrupted. The goal of the Paris Agreement to limit global heating to well below 2 degrees Celsius, and if possible to 1.5 degrees, is the guiding principle of German policy. “We are on the 1.5 degree pathway with this coalition agreement,” said Robert Habeck, Federal Minister for Economic Affairs and Climate since December 2021, at the launch of the “traffic light” alliance formed by Social Democrats, Greens, and Liberals. This claim can be backed up with facts, but it implies three tacit assumptions, as shown by a study led by the Berlin-based climate research institute MCC (Mercator Research Institute on Global Commons and Climate Change). This is available on the MCC website.

The starting point is the pathway to greenhouse gas neutrality in 2045, laid down in the Federal Climate Change Act in June 2021 and confirmed by the coalition agreement. From this pathway, with appropriate consideration of the other greenhouse gases, the researchers derive the country’s expected overall future carbon emissions and put these in the context of the 1.5 degree target. The remaining global carbon budget is used as a reference value, which is quantified by the Intergovernmental Panel on Climate Change (IPCC) on the basis of the almost linear relationship between the cumulative global emissions and the temperature rise. The IPCC deliberately quantifies this scarce supply on a global scale: national allocation is a matter of the fairness criterion selected, this can only be clarified politically rather than scientifically.

“The 1.5-degree path for Germany is still an equation with many variables” emphasises Brigitte Knopf, Secretary General of MCC and lead author of the study. "The climate targets are not yet sufficiently backed up with measures. Moreover, the Federal government needs to define more precisely what it wants to be measured against: which time horizon, which assumptions about atmospheric carbon removal and, above all, which idea of a fair distribution of the remaining global carbon budget."

According to the study, the first tacit assumption behind the phrase “we are on the 1.5 degree pathway” is that the volume targets of the German Climate Change Act will actually be implemented – both in terms of greenhouse gas emission reductions and in terms of additional carbon removal by forests and soils. If this is achieved, the country’s expected overall future emissions will amount to 6.4 billion tonnes of CO2 by 2045. In the longer period up to 2050, the figure is “only” 6.2 billion tonnes. This is because Germany intends to meet the comprehensive target of greenhouse gas neutrality from 2045 onwards, and therefore, the country has to compensate for non-CO2 emissions that are unavoidable or very difficult to avoid (especially methane and nitrous oxide from agriculture) through carbon removal.

The second tacit assumption relates to the idea of a fair distribution of the remaining global carbon budget, calculated from the ratification of the Paris Agreement. If one assumes, as is often suggested, a distribution according to population (which is controversial in view of the industrialised countries' responsibility for historical emissions), then the figure of 6.0 billion tonnes can initially be considered a benchmark; this level of German emissions would then still be compatible with 1.75 degrees of global warming, at a 67 percent probability usually chosen as a standard. In order to achieve the 1.5 degree target, however, and even with only a 50-percent probability, there must only be 3.0 billion tonnes left.

As a consequence, which embodies the third tacit assumption made, further measures beyond the existing German climate targets will have to take effect. “Here, two announcements of the coalition agreement are relevant,” explains Oliver Geden, Senior Fellow at the German Institute for International and Security Affairs in Berlin, lead author in the IPCC's new Assessment Report, and co-author of the study. “On the one hand, the traffic light alliance acknowledges the necessity of technical negative emissions, i.e. possible air filter systems or biomass power plants with carbon capture and storage. On the other hand, it promises active external climate policy and climate financing for the Global South. If it defines the 1.5 degree target as the benchmark for its actions, it must credibly and measurably demonstrate what it intends to additionally achieve at the international level.”