MCC researchers show: Urbanization eats up most fertile farmland—in this article, you can interactively experience the future transformations.

Due to rapid urban area expansion, some 300,000 square kilometers of particularly fertile cropland will be lost by the year 2030. That area of land—almost the size of Germany—is estimated to have accounted for nearly four per cent of the worldwide cultivation of food crops in the year 2000. These are results of a study led by the Mercator Research Institute on Global Commons and Climate Change (MCC). A comparison underlines the relevance: the food produced on that area would be enough to provide more than 300 million people with 2,500 calories-per-day—for an entire year.

The MCC study, entitled “Future urban land expansion and implications for global croplands” and authored by Christopher Bren d’Amour and Felix Creutzig together with other scientists, just appeared in the Proceedings of the National Academy of Sciences of the United States of America (PNAS). According to the study, global urbanization will take place on agricultural land that is almost twice as fertile as the world average. 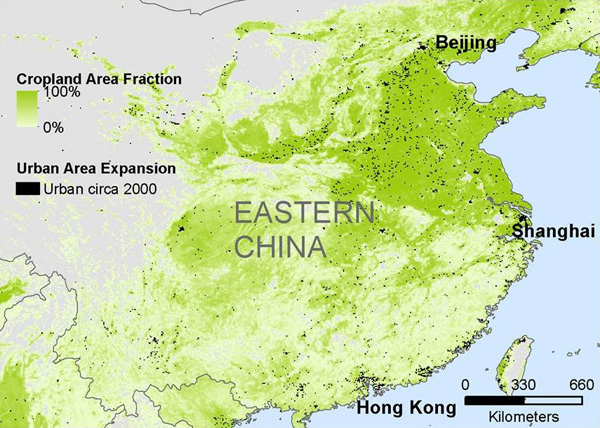 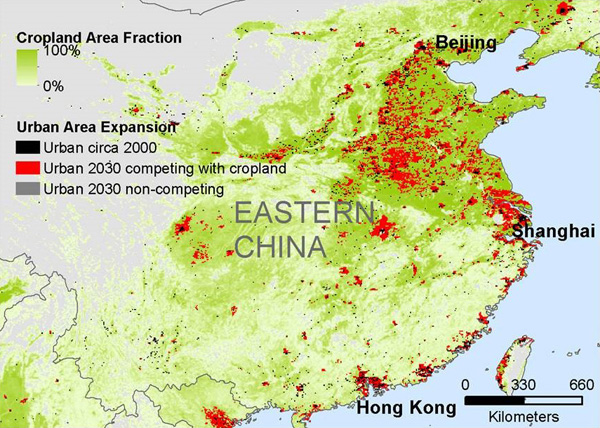 The loss of cropland in Asia and Africa will be particularly severe: Africa has the highest urbanization rates, while whereas Asia has the highest absolute growth of the urban population. China alone will have to bear one-fourth of total global cropland loss, amounting to nearly 80,000 km².

“Hotspots of cropland loss tend to be river valleys and deltas, such as the Yangtze River Delta near Shanghai or the Pearl River Delta near Hong Kong. On a regional level, that food production loss cannot always be compensated for. This, in turn, could have an impact on the world food system,” says lead author Bren d’Amour. The study also shows that the land-use conflict between urbanization and food production can differ markedly from one global region to the next. “A lot depends on the urbanization dynamics of the individual countries. In India, for example, the urbanization process is not as fast as in China and smaller in overall scale. This is reflected in our results, which predict significantly lower cropland losses for India.”

For their research, the scientists used spatially explicit urban area expansion projections from Yale University. They then combined these with land-use data from the University of Minnesota and the University of British Columbia on global croplands and crop yields. The MCC study examined the total loss of croplands worldwide. To determine the productivity of that land, the researchers used the aggregated production of the 16 most important food crops, including for example maize, rice, soybeans, and wheat. 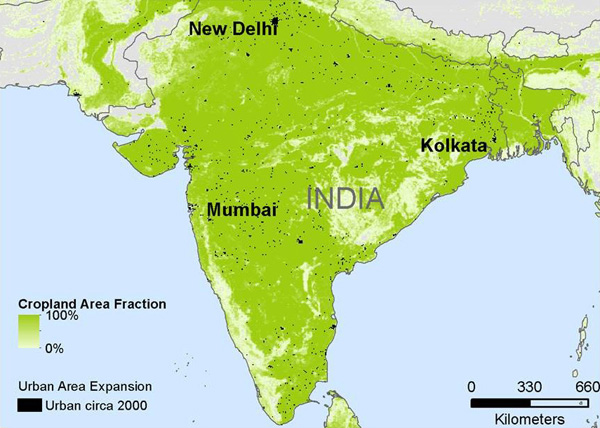 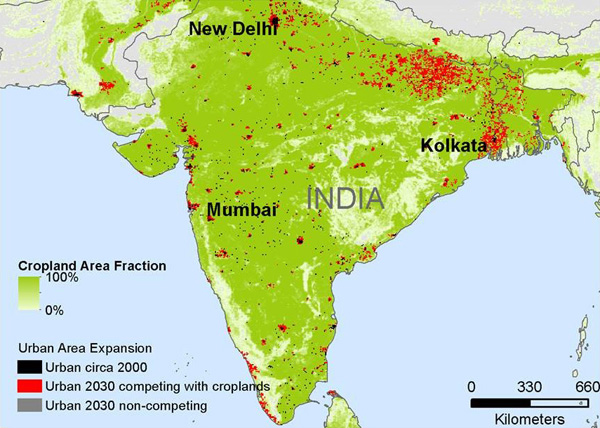 Aside from Asia, the rapidly urbanizing regions of Africa will be another global hotspot of loss of cropland. Among these are Nigeria as well as Burundi and Rwanda, already severely affected by hunger and food shortage. For the African population, this challenge is compounded by two factors: the distinct vulnerability of many African countries to the effects of climate change, and the comparatively greater difficulties encountered by the unemployed rural population to gain a foothold in the urban labor markets.

The urbanization in Egypt, too, is particularly pronounced: By 2030, the country could lose about one-third of its cropland due to urbanization. To exacerbate matters, the Nile Delta region around Cairo is likely to be strongly affected by sea level rise. And although comparatively small, this area churns out the majority of the country’s agricultural production.“

Policy-makers at the municipal level are now called on to take action. Their time has come, since urban planning is now part and parcel of world policy,” says Felix Creutzig, head of the MCC Working Group on Land Use, Infrastructure and Transport. “Urban planners can contribute to preventing small farmers from losing their livelihoods. Spatially efficient urbanization could help to retain the existing agricultural system while continuing to provide small farmers with access to the urban food market.”