MCC at the Munich Security Conference 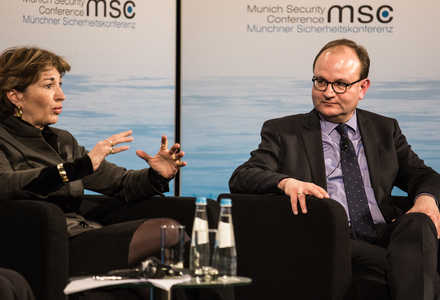 At the Munich Security Conference MCC Director Ottmar Edenhofer discussed "Climate Change as a Challenge for International Policy" with the German Foreign Minister, Frank-Walter Steinmeier (SPD), among others on Friday, January 31st. They were joined on the stage by further high-ranking experts such as Narendra Taneja, President at the World Energy Policy Summit, or Anne-Marie Slaughter, President  of the New America Foundation. The participants debated fundamental aspects of global warming and the thereby caused global inequality of chances. They also touched on the social economic risks of global carbon emissions as well as the question of how policy makers could be sensitized to environmental diplomacy.

"It is the challenge of international policy to understand the atmosphere’s limited capacity as a global common und therefore to establish governmental structures on different levels", says Ottmar Edenhofer, Co-Chair of the Workings Group III of the Intergovernmental Panel on Climate Change (IPCC) and Deputy Director and Chief Economist at the Potsdam Institute for Climate Impact Research. "Because the impact of climate change is unclear it has to be discussed in the framing of risk management and international security policy. The regulative ideas for a new world order have to be cooperation and global commons which complement competition and private property."

The event was organized by the Stiftung Mercator which is along with the Potsdam Institute for Climate Impact Research founder of the Mercator Research Institute on Global Commons and Climate Change (MCC).