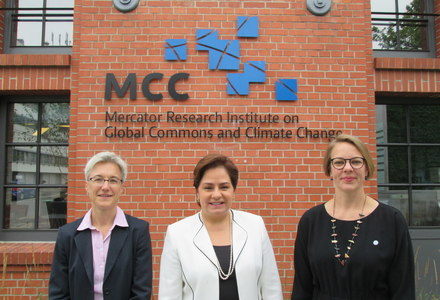 Espinosa highlighted the importance of carbon pricing as an instrument to reach the two degrees target set by the Paris Agreement. “The private sector is asking for carbon pricing. It is one very powerful instrument. So we’re going into that direction,” UNFCCC Executive Secretary Patricia Espinosa said Thursday at a discussion at the Mercator Research Institute on Global Commons and Climate Change (MCC).

The Executive Secretary said that the 154 countries that have already ratified the Paris Agreement will now have to make specific contributions to its implementation beginning with the COP23 in Bonn in November. "Bonn must be a great step towards action," Espinosa said at the event invited to by the United Nations Association of Germany (DGVN). Support from countries like Germany, she said, was all the more important now, when multilateralism is questioned “by some”.

During the debate with the audience moderated by MCC Secretary General Brigitte Knopf, Espinosa also stressed that experts were convinced that the two degrees target would not be feasible if the technology of Carbon Capture and Storage (CCS) was left out. “We need to talk about a combination of adaption and mitigation,” she said in regards to negative emission technologies like Bioenergy with Carbon Capture and Storage (BECCS).