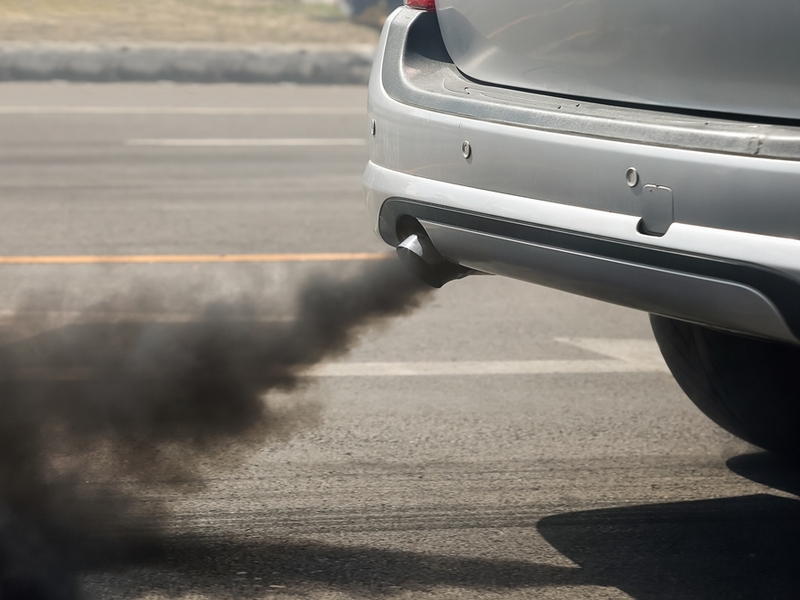 In response to the diesel scandal, the diesel tax advantage should be completely abandoned within the European Union (EU). In Germany, for example, diesel would then be about 20 cents per liter more expensive at the pump. In return, however, this measure would allow Germany but also France to reduce the emissions of CO2 and nitrogen oxides (NOx) by about 10 percent over five years. This is because diesel drivers in particular are much more sensitive to fuel price changes than previously assumed: a price hike of 20 cents per liter would lower their overall consumption by an estimated 14 percent.

These are core findings of a new study conducted by the Mercator Research Institute on Global Commons and Climate Change (MCC). MCC researcher Nicolas Koch together with Anne Zimmer of the Potsdam Institute for Climate Impact Research (PIK) have presented these findings in their article Fuel Consumption Dynamics in Europe: Tax Reform Implications for Air Pollution and Carbon Emissions, which was recently published in the journal Transportation Research Part A: Policy and Practice.

The new results are of particular relevance against the backdrop of the diesel scandal. The automobile industry is in a deep crisis, and bans on diesel vehicles are currently being considered in more than a dozen German cities. The mobility transition from fossil fuels to electricity could even play a role in the coalition negotiations following the Bundestag elections. In Germany, the Greens are demanding a ban on new diesel cars from 2030 onwards. France and Britain have already announced a ban on new gasoline and diesel cars to be introduced at the latest from 2040 onwards. To date, however, the debate has been largely limited to prohibitions rather than looking at the tax break currently granted to diesel drivers. 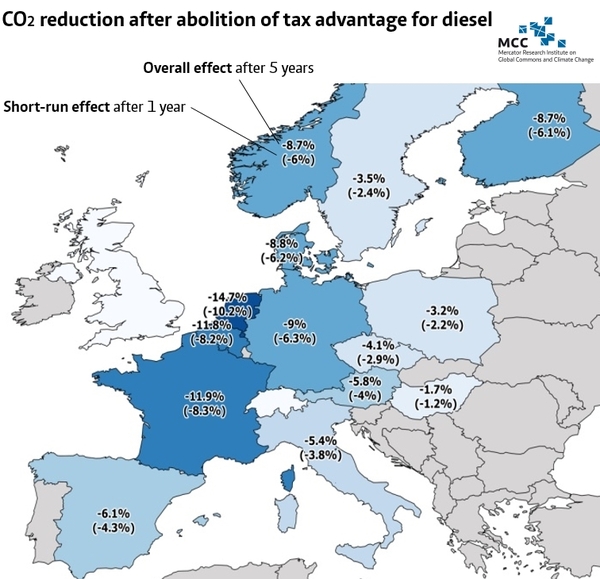 The diesel scandal shows that emission standards alone are not sufficient to achieve climate protection targets and improved air quality. In contrast to emission standards and thresholds, a different diesel tax policy would provide significant revenues to EU countries. In fact, the fiscal households of Germany and France each stand to gain around €4 billion in the year of the reform, and those of Italy, Spain and the Netherlands €1 billion each. According to the study, these revenues could be invested in public transport or the research and development of cleaner driving technologies.

“The transition towards sustainable mobility with electric cars won’t in itself solve the diesel problem. Diesel would remain attractive in the countryside and for long-distance transport, especially since a lower fuel demand would lead to a price drop,” explains MCC researcher Koch, who supervised the study. “However, the fact that diesel vehicles are used primarily by companies, which are particularly sensitive to price changes at the fuel pump, gives us a great opportunity for introducing behavioral changes through policy.”

On the basis of EU data about fleet composition and fuel consumption, the researchers determined how strongly drivers of gasoline and diesel cars react to increases in fuel prices. They then calculated how emissions would change under two policy scenarios, one being the abolishment of diesel tax breaks and the other the introduction of a carbon tax. To emphasize the pure price effect, they assumed that the drivers’ income as well as the vehicle fleet remain the same. According to the study, both policies can significantly contribute to the reduction of NOx emissions and the compliance with CO2 reduction targets in the EU. 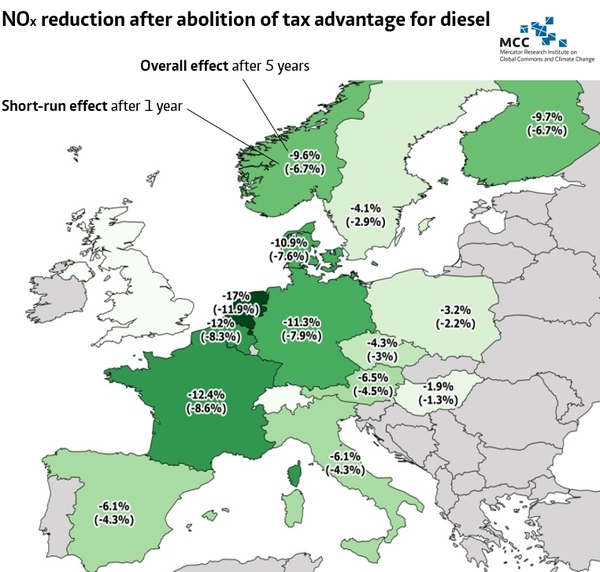 “In the electrification of the mobility sector, policy can embark on different paths,” says MCC director Edenhofer, who is also chief economist at PIK. “In order to avoid having to impose diesel driving bans, policy makers should use every opportunity including the removal of the diesel tax advantages, as that measure already would allow for significant emissions reductions. The new revenues could be used to help absorb the burdens on commuters and heavy road users through new socially balanced mobility concepts.”

A complete elimination of the EU tax benefits for diesel fuels would also bring the ambitious EU climate protection targets for 2020 into reach. The transport sector, with its steadily rising emissions, is considered a key challenge to achieving these targets. “In terms of climate and environmental policy, there is really no reason for the diesel privilege. Per liter, diesel is significantly dirtier than a gasoline fuel. An end to the tax benefits for diesel would reduce as much CO2 emissions as a carbon price of 50 euros per ton,” says PIK researcher Anne Zimmer. “Yet a carbon tax of that magnitude would be difficult to implement in Europe. In contrast, abolishing the diesel tax advantages would provide EU member states the required funds to build new climate- and environmentally-friendly infrastructures.”