Methodological advancements in the Sixth Assessment Report: the remaining budget for emissions is slightly larger than previously calculated. But climate impacts even more serious. 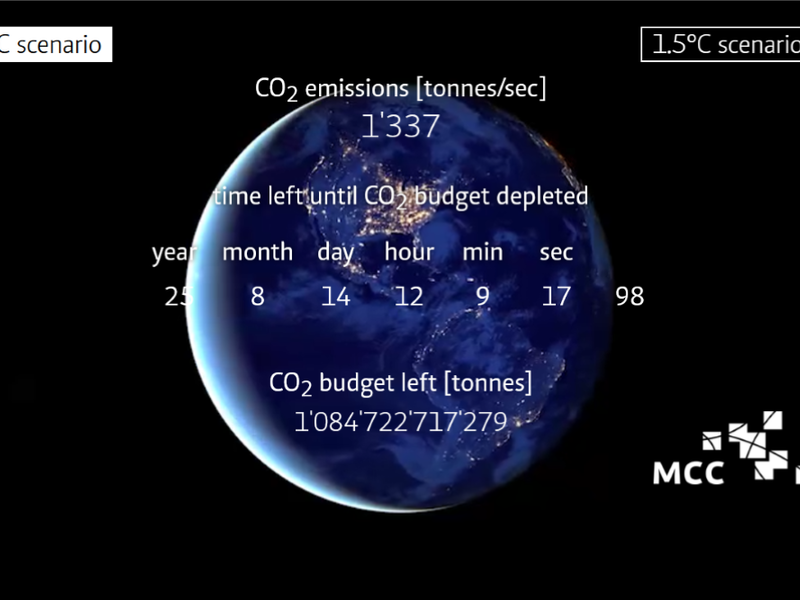 Interactive tool (screenshot): a click on the top left and right fields of the tool switches the MCC Carbon Clock to the 2 and 1.5 degree target, respectively. | Photo: MCC

In line with the latest data of the Intergovernmental Panel on Climate Change (IPCC), the “Carbon Clock” has now been slightly revised. It ticks backwards, illustrating the remaining global budget for greenhouse gas emissions and thus the pressure for policy action, and can be found on the website of the Berlin-based climate research institute MCC (Mercator Research Institute on Global Commons and Climate Change). According to this, the remaining budget for the target of limiting global warming to 2 degrees above pre-industrial levels would be used up in 25 years and 8 months from today, if emissions remain constant. The clock for the 1.5 degree target runs for just 7 years and 11 months at constant emissions. That is about one and a half years longer than before the update.

The revision takes place on the occasion of the first part of the IPCC's Sixth Assessment Report, which has just been published. It condenses the current state of research on the physical basis of climate change from around 14,000 specialist publications, identifying even more serious changes than previously calculated. The remaining carbon budgets are, however, somewhat higher than in the Special Report on “Global Warming of 1.5°C" of 2018, to which the MCC tool was previously aligned. The new budgets are now 400 and 1,150 gigatonnes of CO2 for the 1.5 and 2 degree targets respectively. They are calculated from the beginning of 2020, which is two years later than the previous budgets (420 and 1,170 gigatonnes), and around 85 gigatonnes have been emitted in the meantime. The reason for the adjustment is methodological advancements in climate research.

The budgets are calculated in such a way that it is highly likely that the respective temperature target will be met, that is in two thirds of the climate scenarios examined. The amounts relate to CO2 emissions from burning fossil fuels, industrial processes, and land-use change. The contribution of other greenhouse gases to global heating is subtracted before calculating the remaining carbon budget. The MCC Carbon Clock is updated after budget recalculations by the IPCC, and the last time this was done was in 2018. The pace of the backward ticking is set to the 2019 pre-pandemic yearly emissions rate (around 42 gigatonnes) from 2021 until the next update.

"The budget is extremely tight. This routine update does all but change the basic message of our Carbon Clock," says MCC Secretary General Brigitte Knopf. "Extreme weather events around the globe are a vivid reminder of the great pressure to act, and the new IPCC report provides a record of a frightening trend of heat waves, heavy rain, and also on sea level rise. Global climate policy is definitely not yet on the right track; not for the 2-degree target and certainly not for the 1.5-degree target. Effective instruments are urgently needed now."