CDR from new technologies must increase 1,300-fold by the year 2050. Joint press release of MCC, SWP, University of Oxford, and University of Wisconsin-Madison. 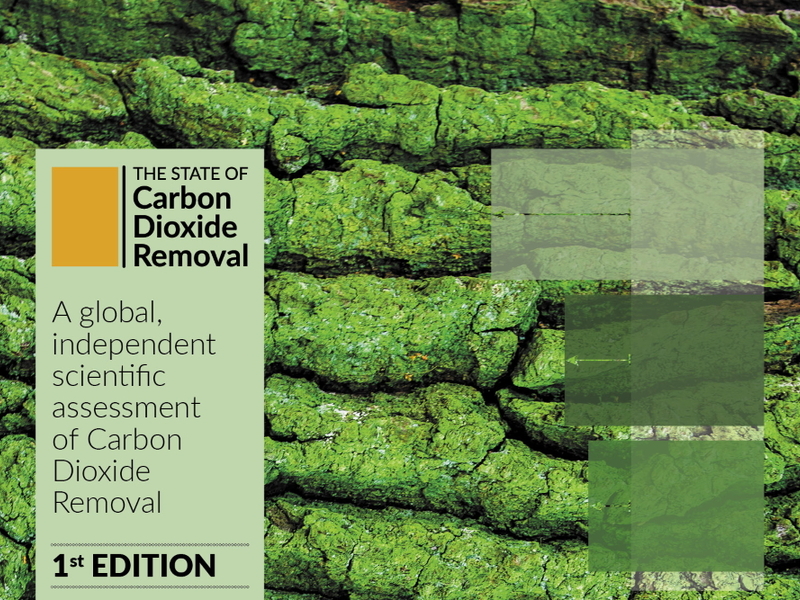 First edition: The "State of CDR" report will in future provide regular information on the situation regarding atmospheric CO2 removals. | Photo: SoCDR

Carbon dioxide removal (CDR) from the atmosphere, alongside rapidly reducing emissions, is needed to reach the Paris Agreement temperature goal to limit warming to well below 2 degrees Celsius and pursue efforts to achieve 1.5°C. This is highlighted in the first “State of Carbon Dioxide Removal” report, which convenes over 20 experts in the field of CDR and was led by Oxford University’s Smith School of Enterprise and the Environment. It was co-led by the Berlin-based climate research institute MCC (Mercator Research Institute on Global Commons and Climate Change).

“Right now critical information on CDR is widely dispersed and difficult to access. This hampers progress,” says author Jan Minx, head of the MCC working group Applied Sustainability Science. “The state of CDR research, development and policy lags behind similar to renewables 25 years ago. Good decisions and accelerated progress in the field of CDR require adequate data. This report will help improve this situation step-by-step with the wider CDR community.”

According to the report, almost all current CDR comes from conventional removal methods on land (2 gigatonnes CO2 per year), primarily via planting trees and managing soils. Countries need to maintain and expand this, approximately doubling in 1.5°C pathways and increasing by around 50 percent in 2°C pathways by 2050 compared to 2020 levels. In a warming climate, this is a huge challenge that requires dedicated policies and management, say the authors. But virtually all pathways also require new CDR technologies, such as bioenergy with carbon capture and storage (BECCS), biochar, enhanced rock weathering, and direct air carbon capture and storage (DACCS). New CDR technologies make up only a tiny fraction of current CDR (0.002 gigatonnes CO2 per year). Closing the CDR gap requires rapid growth of these new CDR technologies, by a factor of 1,300 on average by 2050.

“To limit warming to 2°C or lower, we need to accelerate emissions reductions. But the findings of this report are clear: we also need to increase carbon removal, too, by restoring and enhancing ecosystems and rapidly scaling up new CDR methods,” says report author Steve Smith of the University of Oxford’s Smith School of Enterprise and Environment. “Many new methods are emerging with potential. Rather than focusing on one or two options we should encourage a portfolio, so that we get to net zero quickly without over-relying on any one method.”

CDR is not a silver bullet, as pathways that limit warming to 2°C or lower require deep cuts to emissions in addition to, not in place of, CDR. Our dependence on CDR can be limited by reducing emissions fast and using energy more efficiently, say the report authors. The amount of deployment required in the second half of the century will only be feasible if we see substantial new deployment in the next ten years – novel CDR’s formative phase.

“Innovation in CDR has expanded dramatically in the past two years, as measured by investment in capacity, publicly funded research, and patents. But given the orders of magnitude the CDR industry needs to grow by mid-century, there is an urgent need for comprehensive policy support to spur growth,” says co-author Gregory Nemet, professor at the University of Wisconsin-Madison’s La Follette School of Public Affairs.

“CDR is not something we could do, but something we absolutely have to do to reach the Paris Agreement temperature goal,” says author Oliver Geden of the German Institute for International and Security Affairs (SWP). “More than 120 national governments have a net-zero emissions target, which implies using CDR, but few governments have actionable plans for developing it. This presents a major shortfall.”

This report is intended to regularly inform researchers, policymakers and practitioners on the state of progress, by systematically collecting and analysing the vast amount of data and developments in many parts of the world.