Carbon pricing: effects in other countries

Several countries have introduced carbon prices that have been increased over time, effectively reducing carbon emissions. Prominent examples include Sweden, the Canadian province of British Columbia, Switzerland, and France.

Sweden introduced a carbon tax of 50 euros/tCO2 (adjusted for inflation) as early as 1991, which has gradually been increased to over 110 euros. In the transport and heating sectors, emissions in Sweden have fallen by 28 percent since 2005 - while in Germany they have remained virtually unchanged (see also figure on total emissions). Despite rising transport volumes, the carbon tax has reduced emissions in the Swedish transport sector by 6 percent since 1990. [1]

In 2008, the Canadian province of British Columbia introduced a carbon tax of 10 Canadian dollars, which has since been continuously increased to 40 Canadian dollars (approx. 30 euros).[2] The revenues from the carbon tax are fully refunded to companies and citizens through income tax relief. Fuel consumption was already reduced by 8 percent within the first five years due to the tax.[3]

Switzerland introduced a CO2 tax on heating oil and natural gas in 2008 of 8 euros, which rose to approx. 85 euros by 2018.[4] Since then, emissions in the building sector have fallen by over 20 percent.[5]

There are now pricing systems for CO2 in over 50 countries and regions.[7] As a result of EU emissions trading, emissions in the electricity and industrial sectors have fallen by 30 percent since 2005[8], while the carbon price has risen to over 25 euros since 2019.[9] 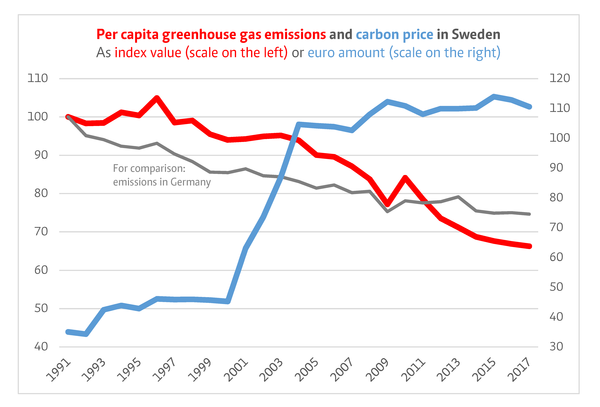 [3] Rivers & Schaufele (2015). Salience of carbon taxes in the gasoline market. Journal of Environmental Economics and Management, 74, 23-36.

Effects in other countries