An exceptional entertainment tool based on an MCC study helps you familiarise yourself with the argumentation patterns of climate protection preventers. 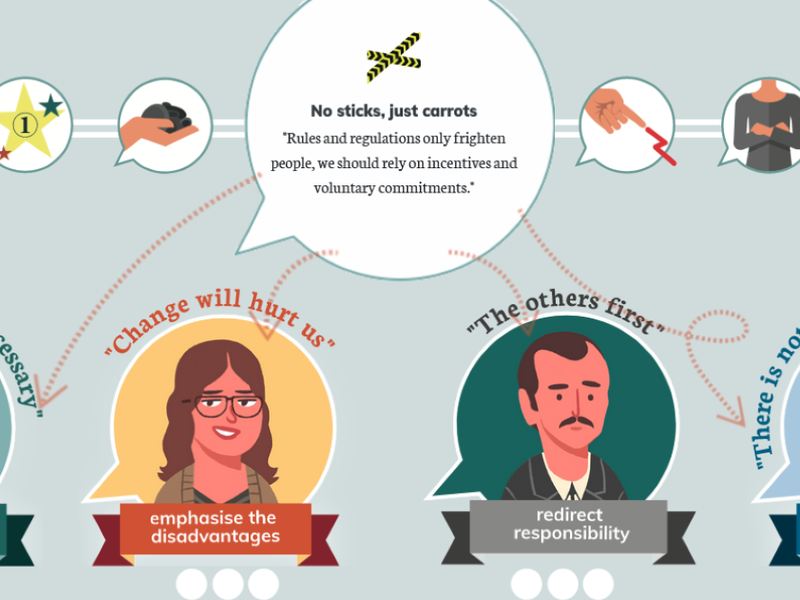 Where does it belong? 12 speech bubbles with climate excuses have to be correctly assigned. | Photo: MCC

The study was a bestseller in the research literature, leading to more than 2,000 Twitter comments within a few days, translations of core statements into numerous languages, and a far above-average press response. Under the heading "Discourses of climate delay", a research team led by the Berlin-based climate research institute MCC (Mercator Research Institute on Global Commons and Climate Change) analysed the current debate on climate policy and drew up a typology of action-preventing arguments. Now the paper, which appeared in the journal Global Sustainability in 2020, has an innovative offshoot: a web-based learning game that helps people quickly familiarise themselves with this topic in an entertaining way. The computer animation "Climate Excuses" was developed by the MCC, together with the klimafakten.de science portal.

The web-based learning game "Climate Excuses" can be found here.

"With the commitment to climate neutrality in 2050 and the tightening of climate targets for 2030, there is increasing momentum in the EU to fight global heating," says William Lamb, researcher in the MCC working group Applied Sustainability Science, who coordinated the original study. "It is to be expected that this will also mobilise political counterforces, so it is good if their arguments, which often appear harmless, are recognised by as many people as possible as instruments of a prevention strategy. Our exceptional communication project is intended to support this."

In the learning game "Climate Excuses", the aim is to draw speech bubbles with a total of 12 frequently heard statements on climate policy onto four figures. Each of them embodies one of the following basic arguments: propagating measures that are too weak, emphasising the disadvantages, redirecting responsibility, or capitulating prematurely. "The tricky thing is that there is always a grain of truth in all such statements," says MCC researcher Lamb. "But these important aspects of the climate debate often become instruments of a prevention strategy that aims to avoid stringent action and protect material assets in the short term. That is why ambitious climate protection requires clear communication. Our study makes a contribution to this." At the end of the game, there is a poster-sized infographic that presents all the arguments at a glance.