Study: households in Hungary, Romania, Italy, and the Czech Republic particularly affected. Transfers increase acceptance to give up Russian gas, on the way to climate transition. 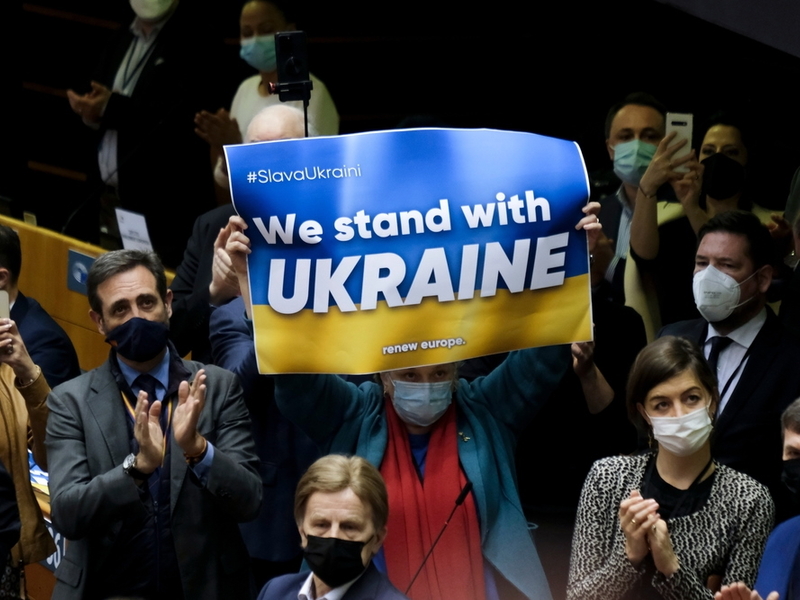 Solidarity with Ukraine (scene from the EU Parliament in March): the economic measures against Russia must be safeguarded in the domestic sphere. | Photo: Shutterstock/Michailidis

A unified EU stance on Russia is complicated by major differences in the dependence on its fossil fuels. After three months of war in Ukraine, the energy price crisis has already resulted in immediate additional costs for private households. In Hungary, Romania, Italy, and the Czech Republic these costs average more than 25 percent of households’ previous total expenditures – in Germany, the figure is 20 percent, and in the least affected countries of Denmark, Sweden, and France, it is around 10 percent. The exact costs and likely consequences of an embargo on European households, as well as the effect of social compensation, are now shown in a working paper by the Berlin-based climate research institute MCC (Mercator Research Institute on Global Commons and Climate Change). The study is available on the MCC website.

The impacts of energy price increases and how they can be socially balanced is an important part of the research on climate policy at MCC. This is especially relevant in the current crisis. Already three weeks after the beginning of the war, the institute presented a corresponding analysis for Germany. The new analysis for Europe is based on empirical household data from the EU statistics office Eurostat for 24 of the 27 EU countries, and on a multi-regional input-output model with 65 sectors. The input-output model reflects costs across the value chain and thus also shows the indirect burden on households.

“We find that households are mainly affected via the cost of fuel and heating; indirect effects via higher producer prices of other goods are relatively small,” reports Jan Steckel, head of the MCC working group Climate and Development and lead author of the study. “We also see that impacts triggered by high natural gas prices can be dramatic, oil and coal increases are less severe. How to compensate households heating with gas should be a priority for policy makers, also at the EU level. It is important to prevent Russian gas supplies from becoming a lever to divide Europe.”

The study quantifies for each individual country how energy price increases make the various expenditure items of private households more expensive, also differentiating between higher-income and lower-income households. On this basis, and also considering the available financial resources, the research team offers a pragmatic proposal: even if the policy limited the social compensation to low-income (bottom 40 percent) gas-using households, acceptance for a unified stance towards Russia could be significantly increased. Authors propose a per capita transfer in the magnitude of the national average burden on low-income households due to the higher gas price. At the current price increase, this would then cost 93 billion euros a year across the EU.

For an “embargo scenario” with further price increases, the study calculates the costs of this kind of social compensation at 188 billion euros. To put this into perspective: the EU economic stimulus package “NextGenerationEU”, adopted in 2020 to deal with the economic impact of the coronavirus pandemic, includes 809 billion euros in loans and grants. The study emphasises that social compensation would only be an interim solution. A climate friendly energy transition, i.e. promoting the switch to heat pumps and electric cars, for example, and changing the electricity mix towards renewables, would allow households to become independent from the prices of fossil energies.

“The high immediate burden on private households should not deter the EU from moving swiftly away from Russian energy supplies,” recommends MCC researcher Steckel. “The energy price crisis can be buffered socially, hence safeguarding economic measures against Russia in the domestic sphere. Like the package to deal with the impacts of the coronavirus, it could be financed in proportion to the economic strength of individual EU countries, which implies intra-EU transfers. Our analysis offers guidance on how this could be done efficiently.”