Commuters, owners of oil heating systems and one-person households are particularly burdened by a carbon price. For them, it is necessary to establish specific hardship provisions.

While the difference between city and country is rather small, commuters play a special role. In rural areas, commuting distances are on average about 50 percent higher than in urban areas. However, the majority of employees in the commuter belts of large cities cover a distance of more than 20 kilometers from their workplace: they are "long-distance commuters" even though they live in a conurbation. However, the reimbursement via a climate dividend only places a very low overall burden on car users; households without a car, on the other hand, are greatly relieved of this burden (see table).

Another example of hardship is households with oil heating, because the price of heating oil will rise by a good 50 percent by 2030 at a price of 130 euros/tCO2. In the model calculation, ownership of an oil-fired heating system means a burden of a good 80 euros per person and year - this corresponds to about 0.5 percent of the consumption expenditure in this group. There is also a moderate difference between property owners and tenants, since the former often live in a larger living space or a house and therefore have higher energy expenditures. Similarly, richer households are more heavily burdened by higher energy consumption.

One last large group that is exposed to a particularly high load are one-person households, especially if they have both a car and an oil-fired heating system. These households have high per capita energy expenditure. The high burden cannot therefore always be offset by the climate dividend. The burden of a carbon price can amount to more than 1 percent of consumer spending, despite reimbursement. However, in this case it is only a small part of the population (3 percent).

All these examples show that cases of hardship are spread across urban and rural areas and that targeted measures are necessary to avoid social hardship. The adjustment of the commuter allowance or subsidy programs for the conversion of oil heating systems could reduce high burdens. In addition, the extraordinary tax burden in the tax declaration could be extended to include the burden of energy costs. If carbon pricing is combined with measures such as reducing the electricity tax and the EEG levy, there would also be a cost advantage for electric or hybrid cars. 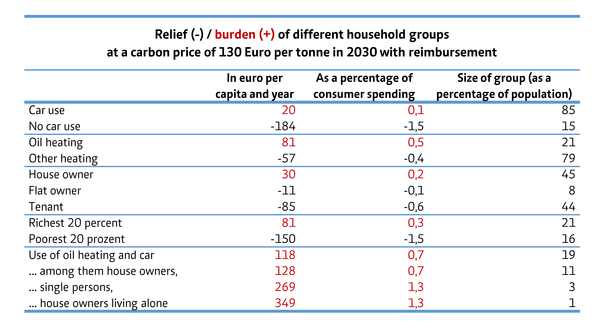 Calculation for a revenue-neutral refund through electricity tax reduction and climate dividend of 233 euros per year and person. The values shown refer to an average household in the respective group. Data basis: EVS 2013. Calculations based on Edenhofer et al. (2019): Options for a Carbon Pricing Reform.