On the basis of real expenditure budgets. Despite additional expenses for fuel and heating, many people can actually benefit. Edenhofer: "We hope this facilitates a rational debate." 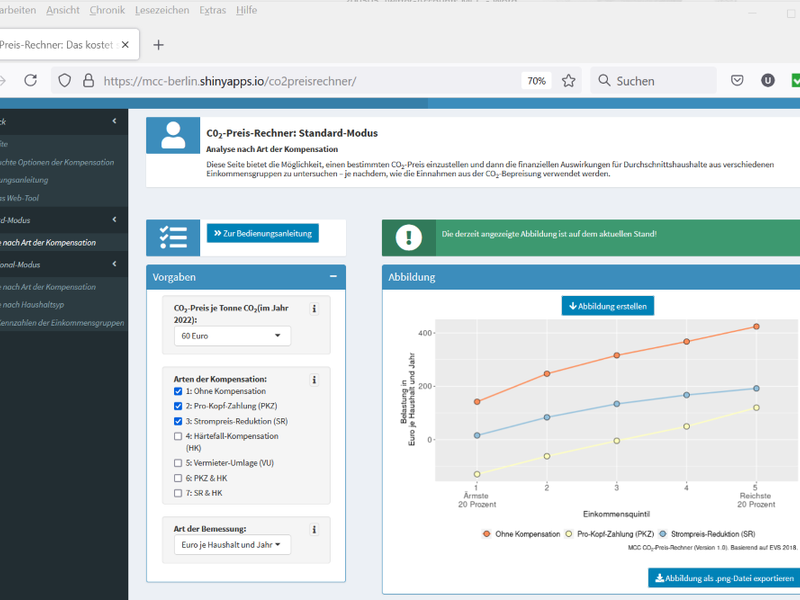 Geared to the current debate on fuel and heating costs in Germany: the MCC carbon price calculator. | Photo: MCC

The national carbon pricing for fossil fuels, which Germany implemented early this year, has increased the price of a litre of petrol and diesel by around 7 cents. Heating with oil or gas also costs a bit more as a result. In return, the government has, among other things, provided some relief for electricity prices through the Renewable Energy Sources Act (EEG) levy. The future pathways of carbon pricing and social compensation are under heated debate. An interactive "carbon price calculator" now provides orientation, created by the Berlin-based climate research institute MCC (Mercator Research Institute on Global Commons and Climate Change). The webtool is in German, but the documentation is in English, so at least the “standard mode” can be used by people without knowledge of German.

The calculator (in German) can be found here, the English documentation is available here.

The calculator maps the national carbon pricing for different levels up to 100 euros per tonne of CO2 (current rate: 25 euros). It depicts the effect on average households of different income groups and, in "professional mode", there is the option to differentiate between household type, for example by city and country, living space, or number of children. The gross and net burden can be viewed, depending on how the carbon pricing is socially balanced. Four methods of compensation, as currently under discussion in Germany, are programmed in: uniform per capita payment, further relief in electricity prices, hardship compensation for households with long commutes or oil heating, and an apportionment of additional heating costs from tenants to landlords. The results can be downloaded as a graphic image file, or also as an Excel table for further use and free application.These are also available for combined solutions.

A typical result reads as follows: if the state pays a uniform "climate dividend", using total carbon pricing revenues collected from private households for this purpose, then only the highest-income households face a significant net burden. At 50 euros per tonne of CO2, the average household in the richest fifth pays about 100 euros a year extra. The middle class remains practically unscathed, while average households in the poorest, second- and even third-poorest fifths will benefit. Climate protection and social balance thus go hand in hand. Moreover, it shows that through hardship compensation, even the burden on households with high transport or heating costs can be effectively offset.

The carbon price calculator shows the direct impacts, i.e. additional expenditure on fossil fuels. Indirect effects via product prices, in which companies pass on their own burden, are not included, nor are the costs from EU emissions trading for the energy and industry sectors. The webtool limits compensation accordingly: the maximum available to private households is the amount they themselves have paid under the national carbon pricing system. "The calculator is geared to the current debate on fuel and heating costs in Germany," explains Matthias Kalkuhl, head of the MCC working group Economic Growth and Human Development. "Extra compensation for passed-on costs could be built in, by directing business-related carbon pricing revenues towards private households."

MCC Director Ottmar Edenhofer hopes the online tool will be informative during the upcoming federal election campaign in Germany: "The most efficient form of climate policy, namely the pricing of this most important greenhouse gas as an incentive to save energy and invest in fossil-free technologies, is currently in danger of being sidelined. In the heat of the political battle, fictitious individual examples are being used to suggest social upheavals. Our calculator, fed with real household budget data, enables everyone to assess costs and distribution effects in the blink of an eye. We hope this will facilitate a rational debate.”